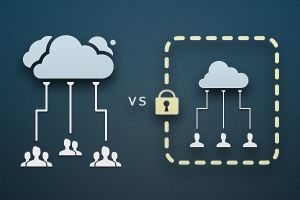 What’s the difference between Public and Private

The only main difference between the two is simple:

A wider definition of ‘Cloud’ itself could simply be –

Due to the maturity of virtualisation technology, sharing the same piece of hardware is will no longer be a security concern. Unless you are going for compliance such as PCI-DSS, then they might need you to run on Private Cloud. Because the requirement of isolation is not only about software, but also physical hardware including servers, switches, and racks.

Besides, the vCPU stated in Public Cloud specification means “permission to share CPU time on a specific CPU thread”. It’s referring to the thread in Hyper-Threaded CPU core. Hence a vCPU is half of a CPU core, then you share the half with unknown amount of users.

The same goes for disk storage, either HDD or SSD, you are sharing the IOPS with unknown amount of users. For fair sharing policy, most provider will cap the IOPS at certain limit, causing problem if your VM is hungry for IOPS like a DB server.

So even though you have fixed amount of memory (RAM), the CPU and IOPS is  getting only 25-30% (or less) of a single CPU core and single disk.

When to go for Private Cloud?

When to go for Public Cloud